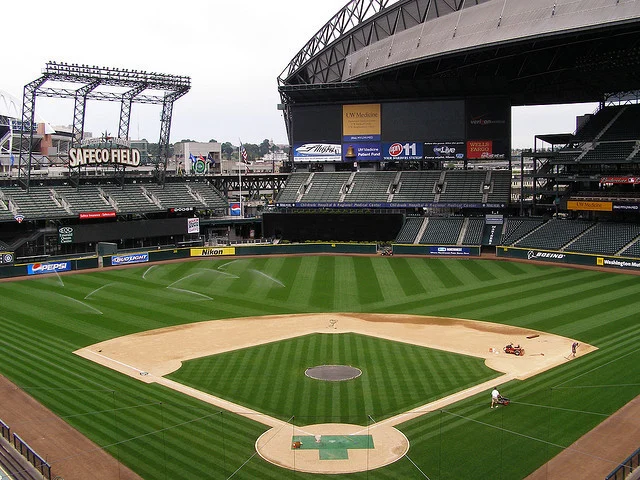 Safeco Field opened on my brother Bill’s birthday (July 15) 1999. But they were still working the kinks out of the new venue when we traveled to Seattle to see the Mariners vs. the Yankees on Friday, April 7th, 1999. At the time we were living in Kennewick WA about two hundred and twenty five miles east and south of Seattle. This was part of a weekend trip for the family. We would drive to Seattle in time for the lunch time start. Or so I thought. Actually the Mariners had delayed the start a couple of hours. Instead of being late we were actually early. Batting practice early. Just opened the gates early. Hardly anybody there early. Now let me tell you a little something about the location of our seats. We were in the nosebleed section. Way, way up there. Some movement caught my eye as we went through the gates. A worker was moving a Closed for Maintenance sign away from an operating escalator. Not just any escalator. The biggest one I remember seeing. Taking you from stadium floor all the way to the upper levels in one shot. With Beth, Tim (age seven) and Toni (age three) this would save us a lot of back and forth and up and down as we make our gradual ascent to our seats. I went for it and steered the family towards the escalator. By the time we started up, there were just a few people in front of us. It was not long before I heard a workman screaming at us in a panicked voice: “Go Back. This is Closed! You cannot come up here!”. I turned around and looked behind us. We were a quarter of the way up. The escalator was packed with people behind us. We were over fifty feet off the ground. Going back where we came from was not an option. We braced for whatever uncertainties lie ahead. We caught up with the few people that were in front of us. Three or four folks standing in about eighteen inches of space. Beyond them an access panel was missing. The panel was the transition between the end of the escalator and the upper floor. In the space where the panel was meant to be was open air that went two hundred plus feet to the lower level below. Sensing folks now piling up behind us we knew we had to act. I heard clang,clang,clang as an elderly man’s cane fell into the hole to the floor below. As gently as we could we tossed him over the threshold. Same with the folks he was with. Tim and Toni next and Beth and myself leapt across. After placing Tim and Toni in a safe place we continued to assist others across until someone below (Thank God) activated the emergency shut off. Most of the folks behind us just had to deal with the jolt of the hard stop and not having to leap across the threshold. We gathered ourselves and then resumed our journey to the seats. It was not long before I was approached by a Mariners official. He gave us a million apologies and a please don’t sue us speech. However no free tickets or even a free Coke for that matter. Jamie Moyer always seemed to be pitching when we went to see the Mariners in those days. (Not sure if he pitched or not but the Mariners did beat the vaunted Yankees 7-5). And all was well with the world.