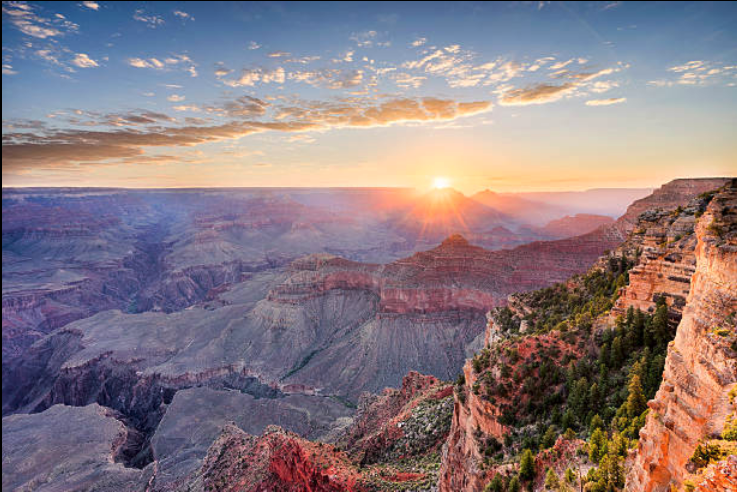 About two or three years after high school I flew with Marty out to Denver and we saw Bob in Fort Collins for a while and then Road Trip! to Las Vegas. We were starting to feel tired a few hours out and wanted to find a place to sleep. After seeing a couple of places with No Vacancy signs we were getting discouraged. Finally we stayed at this decrepit motel in Fruita, Colorado. Al least it was cheap, but it was so bad the door did not close and we had to move some furniture against it for added security.

The next morning we proceeded to Las Vegas. There was a strong wind blowing as we neared Vegas, but instead of cooling you off in the 100 degree heat it was a hot wind. Never felt anything like that before. We slept on the floor of Mark Wittek’s dorm room at UNLV and then went to the MGM Grand where we lost about 30 dollars – all the money that we could afford to lose.

Then it was on to the Grand Canyon. We had planned to stay overnight at the Phantom Ranch at the bottom of the canyon and hike back up the next day, but there was only one bed available at the Ranch. So we figured we would go on a short hike about one and a half miles down the Kabob trail to an observation point and then go back up.

But when we got to the observation point about noon we started talking to the Ranger about how far and how long it would take to make it down and back up the Canyon. He said it took an average of 12 hours go down and up and we should not go back up the Kabob Trail as it was too steep and only for really experienced hikers and there was no fresh water on this trail.  He said we could go down to the bottom on this trail and then pick up the Bright Angel Trail which has fresh water at the campgrounds about one third of the way back up, but we would really have to hurry to make it back up the Canyon before dark. He said we should have a gallon of water each and some food. We had one gallon between the two of us and no food.  But we figured it would be a long time before we would be back again so we decided to go for it. We jogged down the Canyon to save time because we knew we would not be jogging back up the Canyon.

By the time we made it to the campground the little bit of water we had left was really hot. So we filled it up with fresh water and took a short rest. While we were doing this a couple of young kids came by and started complaining that they brought too much food and their backpacks were too heavy. We said we could really use the food because we had none. They gave us enough trail mix to be able to continue on. Marty had to keep slowing down for me to keep up and after the campground the trail got a lot steeper with only switchbacks the rest of the way. Marty could have run to the top if he did not have to wait for me. There were very few signs on the trail about how far it is to the top. I later learned that they did this on purpose so people would not get discouraged if they knew how far they had to go. I think the Kabob Trail was eight miles down and the Bright Angel Trail was about thirteen and a half miles back up.